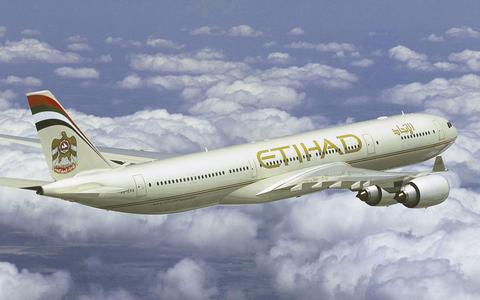 The first international flight I ever took was from Sydney-Abu Dhabi-London and it was all on Etihad Airways. Not having anything to compare it to I had no idea what to expect but it was a great introduction to long-haul flights from Sydney to the rest of the world.

The plane itself was one of the smaller models which I didn’t mind at all. The seating plan was two-three-two which meant that my boyfriend David and I were able to sit with each other and no one else. It was so nice to not have to worry about climbing over a stranger during the flight! The leg room was average for economy class although in hindsight it’s probably the best I’ve ever had on a long-haul flight.

The cabin crew were incredibly accommodating, but I’ve never had a poor experience with cabin crew. The food we were served was OK. It’s a little difficult for me to judge airline food because I don’t like it at all. The fruit we had on the Etihad flight from Sydney-Abu Dhabi was the freshest I’ve ever had on a plane to this day though and I’ll give them bonus points for that. The inflight entertainment wasn’t as diverse as that offered on Emirates flights and it was a little more outdated too. That’s not to say I was bored during the flight, there was definitely enough the keep me busy.

At the time of my booking, Etihad offered the cheapest fair for my boyfriend and myself. If you can find a cheaper airline that offers similar service, I would recommend you go for that option.

I give Etihad Airways three stars.

Let me know your favourite airline in the comments below!