Barcelona is the capital of Spain’s Catalonia region and is known for its art and architecture. Wander the city’s intersecting laneways and immerse yourself in the Spanish seaside lifestyle. It’s time to discover Barcelona.

Getting around the city centre is easiest by foot. You’ll be able to duck down hidden laneways that traffic struggles to find. There are also many buskers around the streets who are great to stop and listen to as well.

The most famous attraction in Barcelona is undoubtedly the Sagrada Familia. The large Roman Catholic Church was designed by architect Antoni Gaudi and is still currently being built despite construction starting 133 years ago.

Wander down La Rambla, the central street in the city which is popular with tourists and locals alike. The tree-lined mall is a great place to do some shopping or just soak up the local atmosphere. The street connects many of Barcelona’s more popular attractions too. One of my favourite finds along the street was La Boqueria, an indoor market with meat, produce, cheese and other foods.

Located at the end of the street is the Columbus Monument, a 60 metre tall monument that was constructed in honour of Columbus’s first voyage to the Americas. The monument looks out over the harbour which is a beautiful spot to enjoy a picnic lunch of the foods you picked up at the market.

A city famous for its architecture, beauty can be seen all around. But if you’re looking for specific spaces, head to Gothic Quarter or escape the hustle and bustle of the city and head to Park Güell, composed of gardens and architectonic elements on Carmel Hill.

At night, head to the Magic Fountain of Montjuïc. The large circular fountain lights up and plays a choreographed water show to music.

Probably my favourite attraction in all of Barcelona is Jardí Botànic de Barcelona or the Botanical garden of Barcelona in English. The garden is located on Montjuïc hill and is set among the stadiums used in the summer Olympic Games of 1992. The view from the gardens over the harbour and Barcelona is beautiful. Head there at sunset for a romantic evening to remember.

Don’t forget that many stores take part in siesta so do your shopping earlier in the day or head back later at night. Siesta is a great time to visit museums as these are open all day.

Looking over the harbour 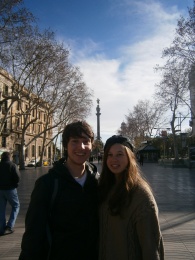 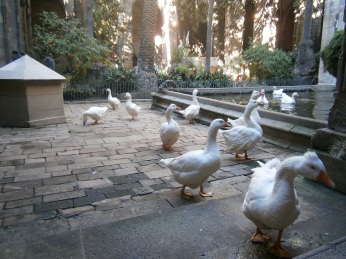 Walking the streets of Barcelona

What do you love about Barcelona? Let me know in the comments below!